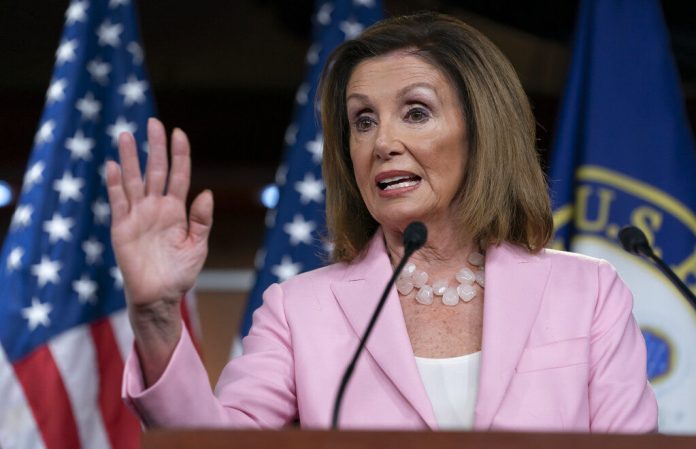 WASHINGTON (AP) — Democrats controlling the House are steering clear of controversy in a short-term,
government-wide spending measure that’s needed to prevent a government shutdown at the end of September.

House Speaker Nancy Pelosi has agreed to a White House request to replenish funds for bailout payments to
farmers absorbing heavy losses as a result of President Donald Trump’s trade battles with China. She has
also rejected suggestions from House liberals to try to use the must-pass stopgap measure to try to
reverse the president’s controversial moves to raid military base construction projects to pay for the
border wall.
The temporary spending bill would keep the government running through Nov. 21 and is to be released
Tuesday. House and Senate votes are expected well in advance of the Sept. 30 deadline to avert a
shutdown, though its release remained held up over a relatively a relatively minor but complicated set
of issues Tuesday.
The Senate, meanwhile, remains wrapped around the axle in its efforts to advance the 12 annual spending
bills that would fill in the blanks of this summer’s bipartisan budget and debt deal.
Majority Leader Mitch McConnell, R-Ky., has set up a procedural vote for Wednesday on an almost $700
billion measure to fund the Pentagon, foreign aid, and domestic agencies like the energy and education
departments, but Democrats appear likely to filibuster the measure to protest what they say is a raid on
health and education programs to pay for more border wall projects. Next steps are unclear at best, and
fears are growing that most of the government, including the Defense Department, will have to run on
autopilot at current funding levels.
"Of course Democrats oppose taking funds from Congress for our military to use on the president’s
border wall. Everyone knows that," Schumer said Tuesday. "McConnell has been accusing
Democrats of threatening to block military funding because we don’t want to pass a bill that steals
money from the military."
The maneuvering highlights the precarious nature of the summer’s bipartisan budget pact, which combined a
two-year increase in the national debt with a set of new spending "caps" to prevent the return
of automatic, across-the-board spending cuts to both the Pentagon and domestic federal agencies.
In that agreement, both sides promised to steer clear of controversial provisions that, if included in
the bills, would be so politically nettlesome that they would derail the entire process. But Sen. Patty
Murray, D-Wash., upset that education and health programs within her jurisdiction have been
shortchanged, threatened an abortion-related amendment — dubbed a "poison pill" by Republicans
— and the typically bipartisan appropriations process in the Senate ran aground.
A top Senate Democrat, Dick Durbin of Illinois, said that Democrats want allocations they consider to be
fairer to social programs and agreements on plotting floor consideration of legislation so they are not
at a disadvantage in fighting for their priorities. "We get those things and the poison pills start
drifting away," Durbin said.
The Senate Appropriations Committee on Tuesday did approve three bipartisan bills funding transportation
and housing, the IRS and the Treasury Department, and agriculture programs.
The stopgap measure to fund the government is aimed at buying time for action and negotiations on $1.4
trillion in annual appropriations bills. Some items can’t wait and will be included, like accelerated
funding for the 2020 census and $20 million to combat Ebola in Africa.
Since the temporary spending bill is the only must-do legislation on the immediate horizon, lawmakers are
using it as a locomotive to haul other priorities into law. That bundle of provisions, negotiated behind
closed doors, offers plenty of evidence of Capitol Hill’s chronic dysfunction.
It’s not just that the Democratic-controlled House and GOP-held Senate can’t agree on big issues like
infrastructure, guns and health care. They also can’t agree on lower-tier items that typically pass by
wide margins, such as short-term extensions of the federal flood insurance program and the Export-Import
Bank, which helps finance export deals important to large manufacturers such as The Boeing Co.
The House and Senate banking committees are responsible for legislation to reauthorize both the
Export-Import Bank and the flood insurance program, which is particularly important to the real estate
sector in coastal areas. But there’s been no progress, so temporary extensions of the two programs have
been attached to the interim spending bill.
Democrats are deferring a showdown over Trump’s border wall, which sparked a 35-day partial government
shutdown at the turn of the year. Democratic leaders opted against trying to use the bill as a way to
take on Trump controversies like cutting military base projects to pay for his U.S.-Mexico border wall.
But they’re not granting Trump any favors, either, denying provisions such as the flexibility to build
new border wall segments.
A new bipartisan report by the Senate’s Permanent Subcommittee on Investigations released Tuesday found
that this year’s shutdown and a more widespread 2013 shuttering of federal agencies cost taxpayers about
$4 billion, mostly for back pay for workers who did not work during the shutdowns. Almost 57,000 years
of worker productivity were lost, according to the report by Sens. Rob Portman, R-Ohio, and Tom Carper,
D-Del., contributing to piled-high trash at national parks, a suspension of consumer product safety
inspections at U.S. ports, and delayed certifications for new aircraft.