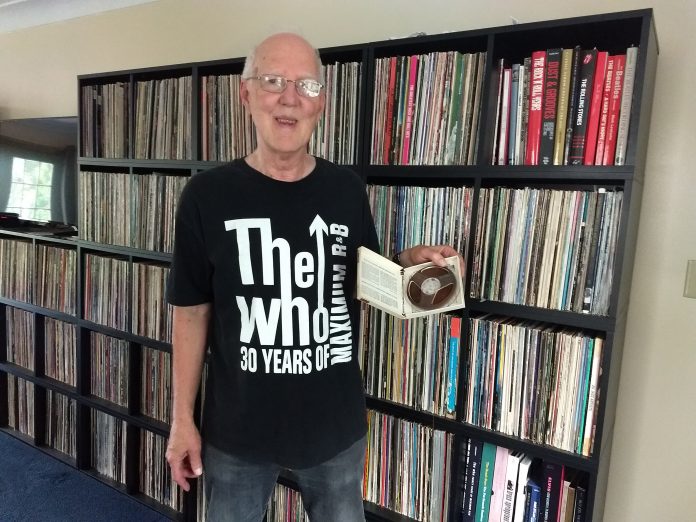 It’s been said that if you can remember being at Woodstock, then you weren’t really there.
Ken Bielen remembers it well, and he has the tapes to prove it.
“People get a lot of things wrong about Woodstock,” Bielen said. “Was it fun? Oh yeah. It was fun. It
wasn’t fun like a party. It was fun because we got to hear music from artists we’d been following for a
number of years. It was kind of like camping, fun in some ways and also like work.”
This weekend is the 50th anniversary of the concert that was originally marketed as “An Aquarian
Experience: 3 Days of Peace and Music.” The Woodstock music festival started on Friday, Aug. 15, 1969
and was supposed to be finished Sunday night, but finished on Monday, with the iconic Jimi Hendrix set
ushering in that morning.
History books somewhat agree that 50,000 tickets were supposed to be sold, roughly 100,000 were and as
many as 250,000 people showed up.
Bielen remembers big acts and small ones. The recordings were not professional and represent life in a
three-day time capsule, from an average guy’s perspective in the audience.
“My buddy had a portable reel-to-reel,” Bielen said. “Somehow I kept it from getting muddy and wet.”
It affected Bielen.
“A stranger, a girl probably my age, gave me a sweater, to use as a pillow,” Bielen said. He doesn’t
remember when, but the act stuck with him.
“Some of it was planned well. The stage was good. The sound was good,” he said. “I think they didn’t plan
on that many people coming, so in some ways it was surprising. I realized that something like this would
never happen again.
“I didn’t think it was going to be as big as it was.”
Traffic was bad.
Then it was announced that the festival of peace and love was going to be free. Bielen and his two
friends were among the few that purchased tickets ahead.
In 1969 Bielen was a 19-year-old college student going to Rutgers University. He and two buddies made
what was supposed to be a two-hour drive to Bethel, New York — about 50 miles out of the town of
Woodstock — and arrived many hours later, in the middle of the night at a campground a couple miles away
from the venue.
Today, Bielen has his Ph.D. from Bowling Green State University in American Cultural studies and taught
pop culture for two years at the university. He has written three books on pop stars Billy Joel, Neil
Young and John Lennon, the third with co-author Ben Urish.
Woodstock occurred before the internet and cell phones. Many cars didn’t have FM radio, although Bielen
did. He was a fan of what was considered alternative music and had several audio tape recorders. That
was also before the cassette tape. Each reel-to-reel tape recorder has two reels, looking like small
movie film rolls.
Bielen took along a portable recorder with hours worth of 5-inch diameter reels. He doesn’t remember
much, if any, security. He just walked right in with the unit.
For some groups he would record just a little, and others he has entire songs. It’s a recording of
whatever was happening in the audience. Much of it is not great, but it is a time capsule, complete with
whatever comments might have been said around him.
“I have about three or four hours of tape,” Bielen said. “It’s not even in stereo. Just one microphone.”

The “Higher and higher” chorus of Sly and the Family Stone’s song “I want to take you higher,” was very
memorable for him and is captured on the reels.
“In the song ‘Higher,”’when Sly gets the whole audience singing ‘higher.’ That comes through really good
on the recording,” Bielen said. “We kept the recorder playing on Friday night. We were very tired
because we had been up most of Thursday night driving up to the concert site, the festival site. So by
the time when Joan Baez came on, which was some time after midnight Friday night, we only stayed for
three songs. We were just to beat to stay for any more.”
After the first night Bielen and his buddies brought their sleeping bags with them to the concert area
and just stayed.
The part about the drugs was overblown, he said.
“There were a lot of interesting stage announcements,” Bielen said. He distinctly remembers the warning
about which drugs to stay away from, but didn’t really understand the references.
Other controversial things may have happened, but Bielen said he never saw many of them.
The famous pond got a lot of attention for the nudity. However, that was behind the stage. Bielen, as a
regular audience member, never saw any of that.
Richie Havens has talked about his more than two-hour set — Bielen remembers it to be about 45 minutes.
He got on stage around 5 p.m. Friday. It was the first of many unannounced agenda changes. Sweetwater
was supposed to open the festival, but was stuck in traffic and played second.
“So I missed everything after Joe Cocker,” said Bielen, who left with his two friends when the heavy rain
made it clear that everything would be soaking wet, very muddy and possibly even rained out.
Bielen said he can’t believe it’s been 50 years since that iconic weekend.
“We shared food with people. People helped each other. People helped me,” Bielen said. “It was fun. I
wouldn’t have changed it for anything else in the world. It was just another point along the path in my
love of rock, soul and folk. My advice, if it rains, don’t leave. Yeah. It was a great experience.”