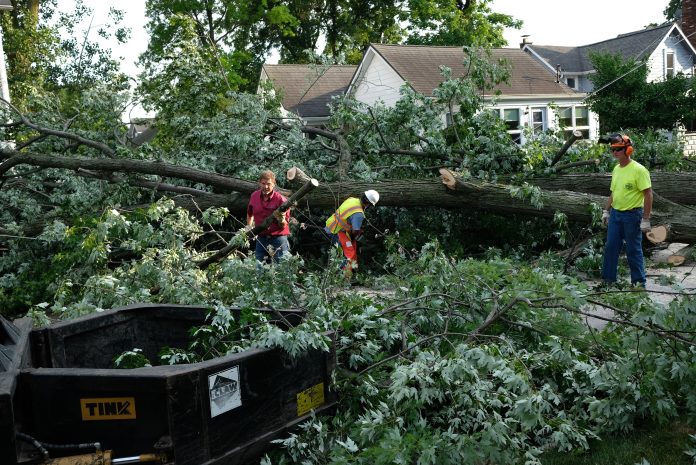 The July 2 storm that blew through Bowling Green cut power to 750 to 1,000 customers, according to a
release issued by the city.
The straight line winds caused significant damage, with tree limbs coming down and electrical outages
from trees falling on the lines.
In total, there were approximately 750 to 1,000 customers without power in the aftermath of that storm.
Some of those outages lasted a few minutes, to a few hours, to nearly 12 hours.
The electric division worked that entire period — roughly from 3 p.m. on July 2, to 4:30 a.m. on July 3 —
in order to restore power.
The public works division worked until 10:30 p.m. on July 2 clearing the roadway so that the traveling
public could safely assess city streets. They then began clearing the right-of-way at 7 a.m. the next
morning. In total, public works removed approximately 50 tons of brush associated with the storm.
As announced before, there will be a special storm debris collection for those private trees that
sustained damage.
Those needing assistance must call public works at 419-354-6227 no later than Friday in order to get on
the schedule. Crews will begin collecting from those scheduled locations next week.
This special collection is for storm debris only. The intent of this special collection is to help
residents with large limbs that fell as a result of the storm, not full trees from private property or
trees removed by a contractor. Limbs in excess of 6 feet in length or 6 inches in diameter will not be
collected.
Brush or limbs not associated with the storm should wait for pickup during the regular brush collection
that will occur in September or may be taken to the Wood County Landfill for a fee.
The hardest hit areas of the storm were downtown and the east side of Bowling Green.