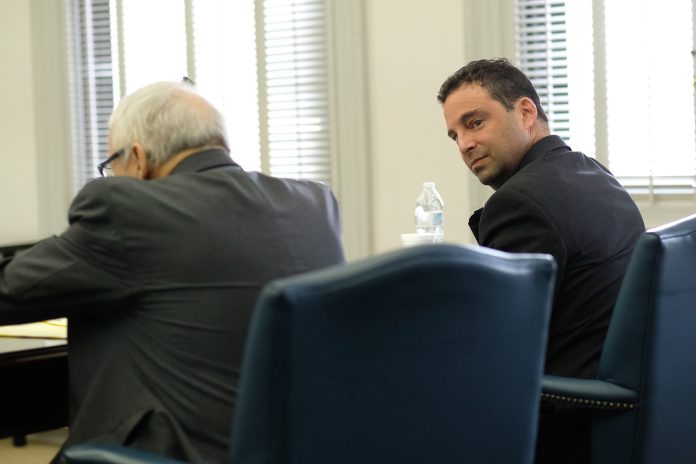 Bowling Green attorney Andrew R. Schuman has been found guilty of seven felony offenses and is facing up
to 19 years in prison.
Visiting Judge Peter Handwork issued his verdicts Wednesday morning on the charges for the three separate
cases before him involving the attorney.
In April Handwork conducted a bench trial on the three cases and the various charges in each case. Both
the prosecuting and defense attorneys submitted written closing remarks for the judge before he made his
decisions.
Schuman, who is 48, was found guilty of six third degree felonies and one fifth degree offense in the
second case of five counts of tampering with records as well as perjury and theft.
“A creative, aggressive criminal defense lawyer (Schuman) is being prosecuted for 11 different offenses
by the prosecutor’s office with which he has crossed swords more than any other,” wrote Richard Kerger,
one of Schuman’s attorneys.
Thomas Matuszak, an assistant prosecutor in the Wood County office, tried the case.
“During a disciplinary investigation and prosecution the defendant admitted to all of the foregoing
misconduct. And at trial the defendant admitted that some of the foregoing misconduct occurred in
Bowling Green,” Matuszak wrote.
The judge granted the defendant’s motions to acquit on the final two counts in that case.
The judge also granted Schuman’s motions for dismissal in the following charges following the conclusion
of the trial: In the first case, tampering with evidence; in the second case, telecommunications fraud
and engaging in a pattern of corrupt activity; and in the final case, attempted complicity to
obstructing justice.
The first case filed involved allegations of his tampering with evidence for damaging a fire hydrant.
That case was dismissed. Kerger successfully argued that “the hydrant in question has received no
repairs of any kind, not even a touch-up paint job.”
The third case involved “involved a creative attempt at a plea bargain to avoid proceeding to trial on a
felony charge, which discussion it is suggested was a crime,” Kerger wrote.
“He turned down the bargain because of his concern about the impact it would have … not because he
perceived the request to be a crime.”
Schuman’s third case, which was also dismissed, involved one count of attempted obstructing justice.
As a result of these cases, Schuman was previously suspended from practicing law for six months. That
suspension started in December 2017 and was originally for one year, with the final six months of that
term stayed on conditions. In June 2018 he was reinstated to practice law.
The charges stem from the attorney’s actions in both Wood and Hancock counties but were being heard
together in Wood County.
Without those dismissals Schuman could have been ordered to more than 30 years in prison.
A pre-sentence investigation report has been ordered to be prepared with sentencing to be done on July 8
at 9 a.m.