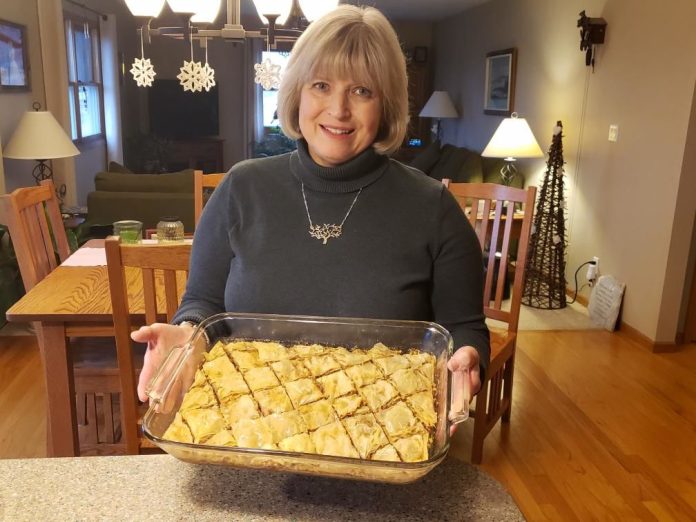 Baklava isn’t a dessert to whip up because you have a few minutes free. It’s going to take you a while,
but the end product is worth it.
We’re talking gooey, lick-your-fingers-clean worth it.
“Everybody just buys it because it’s so hard to make,” said Martha Woelke.
But store-bought baklava has nothing on what comes out of her kitchen. The honey oozes out when biting
into a piece, and the chopped walnuts add that necessary crunch.
“The only thing I like about baklava is eating it,” said Woelke’s husband Jim.
Woelke said even a beginner could make the dish, as long as the instructions are followed.
Most important is to keep the phyllo damp while assembling the dessert. She wraps it in old flour sacks
that she has dampened.
“It’s amazing how fast it dries out.”
Woelke said, as a timesaver, she’ll lay out two sheets of phyllo, instead of one sheet which is
traditional.
“You can’t tell any different, and that’s what my mom used to do even though the recipe called for only
one.”
She also has lessened the amount of sugar from two cups to a cup and a half for the syrup.
“My brothers are my test taste and they can’t tell any difference.”
Woelke said that the hardest part is cutting it into diamonds before it goes in the oven.
“Because the dough is so tender it tears. So you either have to use a serrated knife or a really, really
sharp knife.”
She learned how to cook from her mom, Lois Hiltner, but that skill was not passed down from the previous
generation.
“She did all the cooking but never shared how to do it with my mom,” she said about her grandmother, who
was also named Martha.
Her mom didn’t want that to happen with the kids.
“All four of us cook.”
Woelke did keep the vintage glass and tin nut grinder that her grandmother used to use.
“I’m sure it’s older than I am.”
She keeps the device because it chops the nuts for the baklava to the right consistency.
Woelke said that she prefers cooking, including a lot of grilling. She and Jim don’t eat a lot of beef,
preferring chicken and ground turkey. This time of year, the menu includes a lot of soup.
The goal is to eat lighter.
“I could probably be a vegetarian if it weren’t for bacon,” she admitted with a whisper.
Woelke grows her own tomatoes, peppers and cucumbers and freezes spaghetti and tomato sauce.
She also grows basil and makes pesto and has blueberry and raspberry bushes.
There is no competition between garden-grown and grocery-bought vegetables, Woelke said, and added she
knows what chemicals are on hers.
“I really like gardening. Gardening and golf are my summer therapies.”
With their two children, Sarah and Seth, out of the house, she is just fixing meals for the two of them.

Both children know how to cook. Sarah picked up some skills in 4-H and Seth was is in a grilling club at
Ohio State University.
The family got hooked on baklava when Woelke’s dad, John, who specialized in Middle Eastern geography,
went to Turkey to study while in grad school. Ten years ago he and one of her brothers went back “and
tasted baklava across Turkey.”
Her mom started making the baklava because her dad loved it. Woelke said her mom has no idea where the
recipe came from.
Her youngest brother Joel, who lives in Bellingham, Washington, asks for it as his “birthday cake.”
During his 50th birthday party around Thanksgiving they put candles in the cut part of the baklava.
“We’ve had that instead of pie for Thanksgiving. It literally is what we have for holidays,” Woelke said.

Her siblings were squabbling over who would taste test it prior to this interview – which led to the
question on how she would ship it to all of them.
Joel lives in Washington, Gretchen lives in Davenport, Iowa, and John lives in Columbus.
Neither of her children has made the sweet, and she doesn’t not know if any of her three siblings make
it.
“They pressure my mom to make it,” Woelke said. “She’s 87. She made it at Thanksgiving, and it was
great.”
She keeps the recipe written by her mom. “I love my mom’s writing,” explaining it is the quintessential
first-grade teacher’s writing.
There is no competition among the mother and daughter as to who makes it better.
‘We’re pretty much the same, that’s why any baker can probably do it if you follow the recipe.”