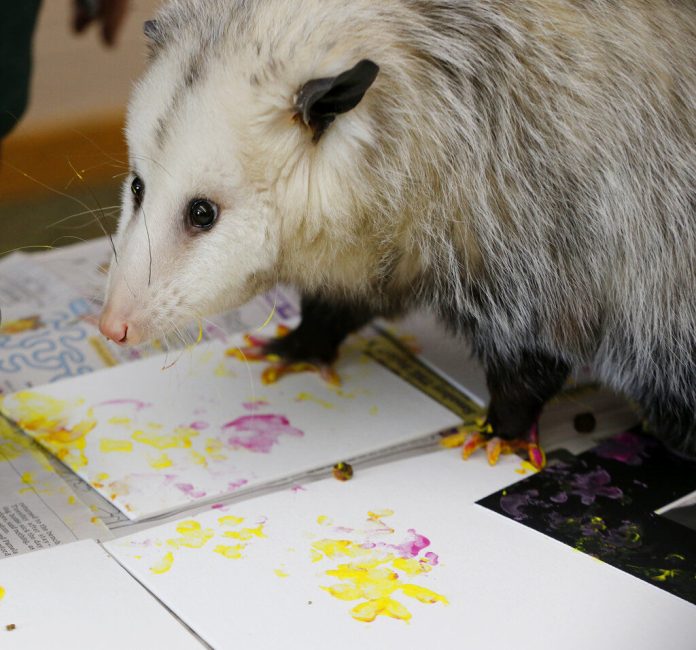 AKRON, Ohio (AP) — They say there’s an inner artist hidden inside of everyone.
The Akron Zoo is proving there’s an inner artist inside of everything.
Whether it hisses, hops, flutters or scurries about, the menagerie of critters that call 505 Euclid Ave.
home is full of budding artists.
The zoo’s resident artists include a precocious penguin, a slithering snake and a prickly porcupine just
to name a few.
And like the animals themselves, the artwork they create is as varied as it gets.
Like their human counterparts, these artists can be downright standoffish.
On a recent weekday, Rico, one of the zoo’s resident Humbolt penguins, was working on a painting to be
auctioned off later at a fundraiser for the zoo.
Some green and blue tempera paint was splattered on the floor and Rico waddled his way across it and over
a white piece of paper.
Rico seemed a bit more interested in joining his friends frolicking in the pool outside than expressing
his artistic side.
"Usually, the floor looks better than the artwork," sighed his handler Vicky Croisant, the
zoo’s avian keeper.
As for the finished product.
"It’s an abstract," she said. "It’s always an abstract."
Zoo spokeswoman Elena Bell said artwork created by the zoo’s star inhabitants like Rico are reserved for
special fundraisers and can fetch hundreds of dollars to support conservation efforts.
But artistic expressions created by the zoo’s animal ambassadors that interact with guests and make
special appearances outside of the zoo confines are sold in the gift shop for as little as $5 to $50.

Some of the critters really get into it.
You would not peg a box turtle as a speedy Bob Ross-like painter but Pandora (get it? He’s a BOX turtle)
can create a half dozen works of art in less than 10 minutes.
Once he gets his tiny webbed feet covered in paint, he’s off and sometimes tough to keep up with.
Other artists need some coaxing and even a bribe.
Marsi, the zoo’s resident opossum, wasn’t so sure she wanted to leave her comfy confines for some art
therapy.
Carrie Bassett, the zoo’s STEM and curriculum coordinator, is quick to point out that it is up to the
critters to decide whether they want to paint or not.
But it’s hard to resist the lure of a yummy snack of apples, green peppers, broccoli and mealworms.
So Marsi (Get it? She’s named Marsi because she’s a marsupial) eagerly trotted through some yellow and
pink paint and noshed on treats and created some art along the way.
"This is good enrichment," Bassett said. "She gets to get out. She gets to smell the
paint. Sometimes she eats the paint. Opossums will eat anything."
Don’t worry. The paint is nontoxic and safe for the animals.
And contrary to popular belief, she said, an opossum is a meticulous groomer and will clean herself up
with a wet towel and even part her own fur.
Final artwork aside, some of the budding creative types at the zoo are pretty amazing in their
techniques.
Some, such as the porcupine, a scarlet macaw and even a bat can hold a paintbrush.
And then there’s Chloe.
Chloe, a kinkajou, will run through the paint. Jump in it and paint with reckless abandon.
Ironically, Bassett said, Chloe will emerge paint free.
The same can’t be said for the handler who will be covered in paint because Chloe likes to jump on them,
too.
"She just gets the paint on us," Bassett said. "She’s ruined several of my shirts.
"I end up a total mess."