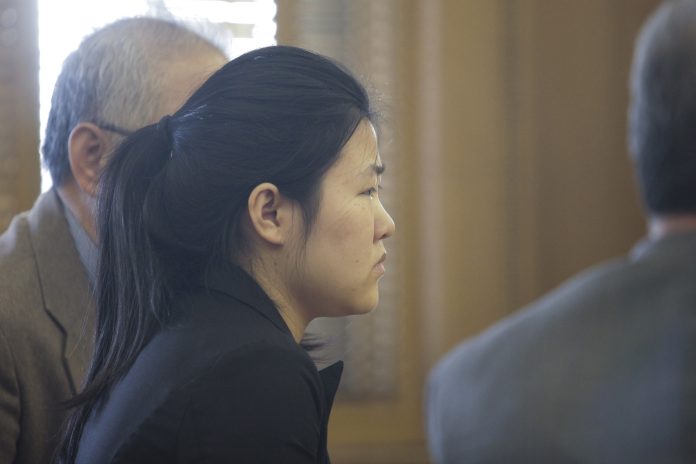 After nearly 6 1/2 hours of deliberation, a Wood County jury found Hui Zhang guilty of kidnapping and
robbery.
Zhang, 24, Toledo, now must wait until February to find out her ultimate sentence.
The verdict, decided around 5:30 p.m. Tuesday, came at the end of Zhang’s three-day trial on kidnapping
and aggravated robbery charges.
The jury found Zhang guilty of the kidnapping charge, and on a lesser charge of robbery.
Zhang and three others were accused in a 2013 incident in which the group contacted a Chinese University
of Toledo student and told him they were going to travel to Cedar Point.
Instead, the student was taken to a vacant home in Bowling Green, robbed at knifepoint of his wallet,
cash, and cellphone, and forced into a dark basement. Group members made purchases and withdrew cash
with his card – Zhang was caught on camera during these acts.
The victim was later taken to a Lucas County hotel, where the group attempted to extort $200,000 from his
mother in China; they were ultimately unsuccessful. He was released unharmed.
The arguments at trial centered not on whether the crimes took place, but whether Zhang was a willing
participant or a victim, and if she had any motive to take part at all.
In her closing argument, Executive Assistant Prosecutor Gwen Howe-Gebers recounted testimony that
indicated Zhang – who admitted to frequent gambling at local casinos, and losses of upwards of $220,000
at one area casino last year – had been cut off financially by her family and needed money to pay off
debts. Howe-Gebers said that Zhang masterminded the plot, and had never told police she had been
threatened or held against her will by the others.
The defense had argued at trial that Zhang, who comes from a wealthy family, routinely received tens of
thousands of dollars from family members, and had no financial incentive to take part in the crimes.
Defense attorney Ronnie Wingate said at closing that Zhang’s three former codefendants – each of whom
pleaded to lesser charges and were sentenced to three years in prison, and who testified against Zhang
at trial – had lied to police about the incidents before, and had a motive to lie again on the stand in
order to gain early release.
He took note of the victim’s statements, which indicated his belief that Zhang was also held against her
will, and said that Zhang’s behavior during the incident was not consistent with that of a
"mastermind."
On rebuttal, Howe-Gebers said that of all four participants, only Zhang had enough education – a
collegiate degree in accounting – to pull off the plot.
"She was an active participant, ladies and gentleman," said Howe-Gebers. "She was never
threatened. She was allowed to leave the house and hotel, and the victim was not."
Following the verdict, Zhang’s bond was modified to $500,000, no 10 percent allowed, and a pre-sentence
investigation was ordered by presiding Judge Robert Pollex.
Zhang is to be sentenced Feb. 10 at 9 a.m.