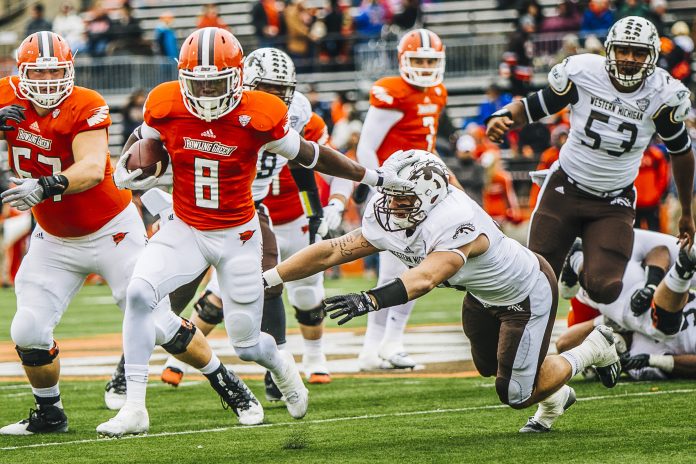 It’s just about the end of October. Let that sink in.
This football season that so many were so excited for has nearly come and gone already. And now, we sit
here in the early stages of a 16-day break for the Falcons.
That break – it’s probably needed for everybody.
It’s a nice time for the players to get healthy, for the coaches to relax for once, and for us to
reflect. Because, after all, isn’t that what we do best?
Normally mid-season grades are given out about two weeks ago, at the halfway point. Not here, not by me.
We’ve been going non-stop for eight weeks. So, let’s hand out some two-thirds season grades, shall we?

I pass out these grades, one to each unit – the offense, defense and special teams – trying to keep the
26-14 Western Michigan in perspective.
Let’s start with the offense. Give those boys a B. (I think you’re going to find this to be a trend.)
The numbers against Western Michigan weren’t pretty. They were downright ugly. But look at the big
picture.
The Falcons are averaging more than 33 points per game and almost 455 yards per game. Now, with three
losses on the docket, that might say something.
Bowling Green has struggled of late on the offensive side of the ball. Its 274 yards against the Broncos
was just barely better than the loss at Wisconsin (271 yards). But let us not forget, the Falcons are
playing in a complicated, whacky-paced offense with a quarterback who now has seven, SEVEN, starts under
his belt.
Even though he has looked like a redshirt sophomore at times, James Knapke has done an admirable job
(179-302, 1,958 yards, 10 TDs). Applause to you sir, for leading this team to a 5-3 mark and 3-1 record
in the Mid-American Conference.
With some fine-tuning on everybody’s part, this offense could certainly get back to where it was over the
first six games.
Now, let’s take a look at that defense that everybody, myself included, bashed over the first five weeks.
I give the defense a B-.
Hey, that unit is just about solely responsible for three wins, how could I not give them a solid grade?

Bowling Green has allowed 543 yards per game and more than 36 points per game. We’ll all agree those
numbers aren’t pretty. But without that pesky unit in the Indiana, Massachusetts and Buffalo games, the
Falcons are sitting at 2-6 right now.
Early on, the tackling was less than stellar. The defensive backs continuously got beat, and the
defensive line got as much pressure as you and I.
Fast forward just a few weeks and there are mounds of improvement. Bowling Green has recorded 16 sacks,
7.5 coming from defensive lineman. The defensive backs are steadily improving and breaking up passes,
and the tackling has been vastly improved, especially in the open field.
It will never be the unit of the last two seasons, but if the defense keeps improving, the offense will
survive at its current rate of success.
And finally the special teams. I hand out yet another B.
The unit hasn’t been eye-popping. But it has been sufficient.
Redshirt freshman punter Joseph Davidson is averaging 42.6 yards per kick, and kicker Tyler Tate is
12-of-15 on field goals.
Tate, who has received numerous praises from head coach Dino Babers this season, has converted on 11 of
his last 12 field goals, including a streak of 10 straight that was snapped on his final attempt (a
block into the wind) in the Buffalo game.
And don’t forget about the returners.
Ryan Burbrink and Herve Coby have helped Bowling Green with a punt return for a score each, while
Burbrink is averaging 13.6 yards per return.
Ronnie Moore has returned 19 kickoffs for an average of 21.3 yards, helping the offense stay out of the
shadows of its end zone.
All in all, it’s been a solid season for the Falcons. There have been mishaps along the way,
inconsistencies everywhere, and a couple bad losses mixed in. But if Bowling Green continues to improve
on defense, works outs the kinks on offense and stays consistent on special teams, there might be
another trip to Detroit in order.
Maybe these are closer to the mid-season grades after all.