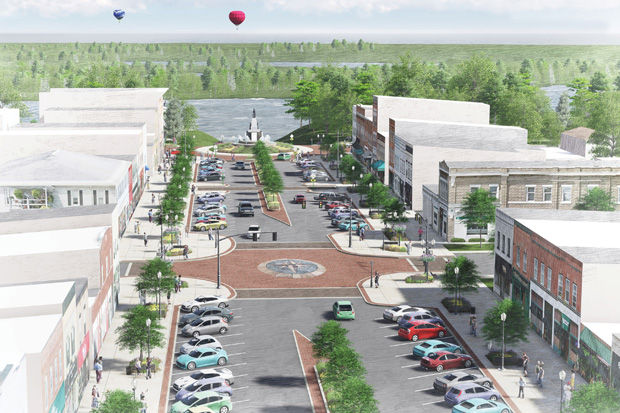 PERRYSBURG – As debate heats up over proposed downtown renovations, City Council will begin discussing
the project at 6:30 p.m. Tuesday.
No vote is expected until council’s following meeting on Sept. 16, but Tuesday will be the first time
council members are expected to start weighing in.
The roughly $2 million proposal from Mayor Mike Olmstead was on the Economic Development Committee’s
agenda last week, but committee members Rick Rettig, Barry VanHoozen and John Kevern opted not to vote
on a recommendation, but defer evaluation to the full council.
That didn’t stop residents from trying to sway the three to either side of the issue during the meeting,
which lasted about two hours as people argued for and against the project.
Details include the installation of a roundabout at the intersection of Louisiana Avenue and Front
Street, which has rubbed many the wrong way. Though acknowledged by roadwork and design professionals to
be a safer and more efficient alternative to traditional intersections, quite a few people in Perrysburg
have expressed concerns about increased confusion and hazards to drivers and pedestrians.
The plan also calls for a median down Louisiana Avenue, which has drawn the ire of some business owners
who say it will affect access to their shops by both patrons and delivery drivers.
Since debate began earlier this month, city officials have responded to calls for additional parking
downtown and say they’ve budgeted about $40,000 for 2015 that will create about 25 new spaces by
converting Second Street parallel parking into perpendicular spots.
City administration has said it hopes to have approval to move forward with construction beginning next
year.