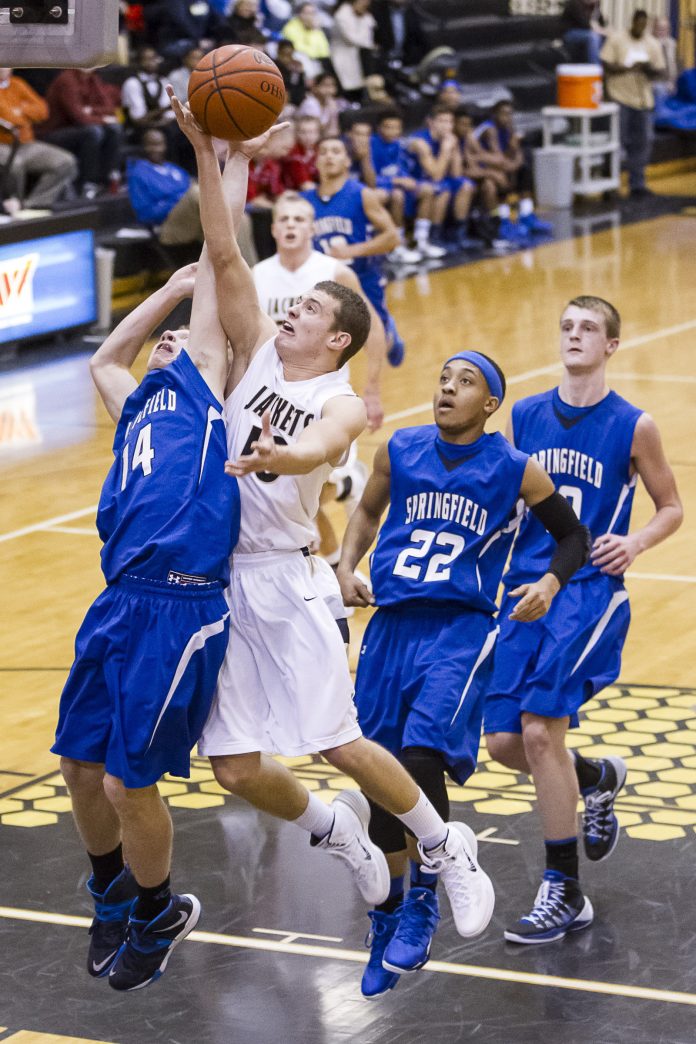 PERRYSBURG – The Yellow Jackets have a new look this season.
Perrysburg returns only four lettermen after finishing 21-4 overall and earning a share of the Northern
Lakes League championship last season.
The returning lettermen are 5-foot 9 senior guard Quinn Thomas, 5-9 junior guard Trevor Hafner, 6-5
senior post Zach Schrock and 6-1 senior forward Connor Jordan.
Thomas is the only returning starter, although Hafner was the first player off the bench and saw
significant playing time.
"We have a lot to get in, out of bounds plays, press breaks and those types of things," said
Perrysburg coach Dave Boyce, who is in his 15th season.
Perrysburg also didn’t have its full team together for the first time until Nov. 19.
The Yellow Jackets had a number of players who played on the football team, which finished 11-1 overall
and advanced to the second round of the state playoffs.
"We have to get the football kids in basketball shape," Boyce said. "It’s a different
conditioning, lungs and legs, and we have to get the ball in their hands.
Perrysburg didn’t have its first scrimmage until Nov. 22.
"The guys who have been here are ready to go," Boyce said. "We’ve got to mix all that
together. We’ll be OK in the end."
The Yellow Jackets’ schedule is heavy early as they play five games in the first nine days of the season.

Perrysburg opens Dec. 5 at home against St. Francis. The Yellow Jackets begin NLL play four days later
when they host Southview, the team Boyce said is the favorite to win the league.
Last season, the Yellow Jackets and Springfield shared the NLL title with 11-3 records. Perrysburg also
advanced to a district final.
"We hit the ground running when the season starts," Boyce said. "We’ve got to be
ready."
The Yellow Jackets averaged 63 points per game last season, but they return only 11.2 of those points.

Perrysburg had plenty of size last season as its roster included four players who were 6-4 or taller,
including a 6-6 post and a 6-5 post. It also had a 6-4 post and a 6-4 forward.
Thomas averaged 6.2 points and 4.4 assists per game last season. Hafner scored 5.0 ppg and made 51
percent of his 3-point field goal attempts.
"We’ll be athletic," Boyce said. "We have some very competitive guys. We should be able to
put four shooters on the floor at almost all times."
Schrock is Perrysburg’s tallest player this season. The next tallest player is only 6-2 and the Yellow
Jackets only have a "few of them," Boyce said.
"We’re not as big as last year, but we’re more athletic and probably faster," Boyce added.
"The underclassmen we had last year played some varsity, got good (junior varsity) experience and
played all summer. It’s not like we’re going in unprepared. It’s just pure varsity experience. These
guys will be ready to play."