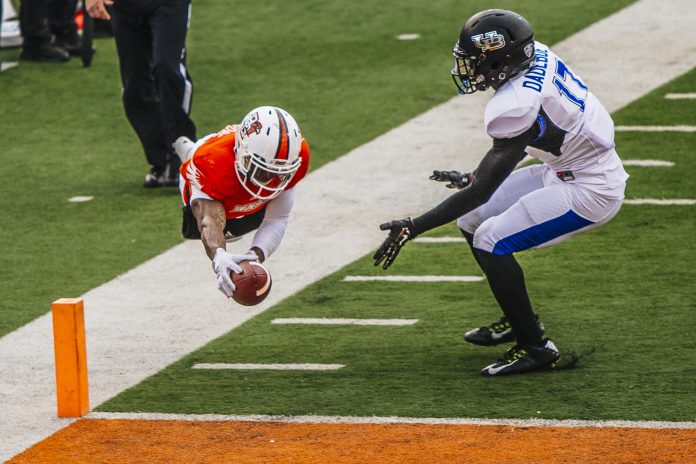 Bowling Green’s defense has been nothing short of porous through its first five games. PHOTO GALLERY
A defense that is ranked at or near the bottom of the country in most major statistical areas showed that
it only takes one series to change one’s perception Saturday afternoon.
Last week at Massachusetts it was a fumble, but this week it was a four-play defensive stand. The Falcons
forced a turnover on downs in the final two minutes, clinching a 36-35 win over Buffalo at Doyt Perry
Stadium.
“It’s the second week in a row that the defense is on the field and wins the game for us. They’re coming
into their own,” said Bowling Green head coach Dino Babers, whose team improved to 4-2 overall and 2-0
in the Mid-American Conference.
“Once again the statistics and the numbers are not where you want them to be. But there’s more to this
game than just numbers,” he said.
The defensive stand highlighted Bowling Green’s best effort defensively this season. The Falcons allowed
a season-low 368 yards, including just 134 through the air.
Trailing 35-30 with 3:04 left in the game, Bowling Green drove 80 yards in four plays for the go-ahead
touchdown. Fred Coppet scored on a four-yard blast to the right side, capping a 45-second drive, which
saw Ronnie Moore catch two passes for 76 yards.
Bowling Green’s quick score gave Buffalo’s offense, which was held to just seven points and 160 yards in
the second half, 2:11 to travel just 48 yards for a score after a 42 yard return on the ensuing kickoff.

But Bowling Green’s defense looked inspired. Overcoming a clear sense of exhaustion, the Falcons forced
its fourth and final three-and-out of the second half, forcing Buffalo quarterback Joe Licata to
incompletions on third and fourth downs.
“We were going to get off the field,” said Falcons linebacker Gabe Martin, who finished with a team-high
10 tackles and an interception. “We went out there as a group knowing we were going to get off the
field. And that’s all we cared about as a group.
“It was time to send a statement and let everybody know we were here,” he added. “We did that by getting
off the field.”
The final four minutes of the game were nothing but a whirlwind for the Falcons.
The offense had just finished its fourth straight empty possession, and the defense, which had stood so
tough throughout the third and fourth quarters, was in the midst of getting burnt on the ground.
Buffalo’s Anthone Taylor, who finished with 219 yards and three rushing touchdowns, ripped through the
Bowling Green defense for 16 yards on a third-and-13 play, setting up the Bulls at the Falcons’ 24.
But again, the defense showed something extra.
On a third-and-1, Martin came up with his biggest tackle, dropping Taylor for a loss of one, setting up a
33-yard field goal that would have put Buffalo up 38-30. A swirling wind got the better of Bulls kicker
Patrick Clarke as he pushed the kick wide right, keeping the game at 35-30 and giving a dangerous
Bowling Green offense a shot for the win with 3:04 on the clock.
“We played with a passion in the second half that I had only seen flashes of this year,” Martin said of
the defense. “It was wonderful to see.
“In the third quarter we had 11 people playing with the same effort, energy, passion and execution
level,” Martin added, referring to when the Falcons allowed just 27 third-quarter yards. “It was night
and day from what we’ve been putting on film.”
Quarterback James Knapke (20-of-39, 321 yards), who struggled to find a real rhythm in the passing game,
had no issues in Bowling Green’s go-ahead drive.
Knapke hit a speedy Moore, who finished with a career-high 178 receiving yards, on two passes on the last
drive. The first went for 40 yards down the left side, and the other for 36 yards over the middle,
setting up Coppet’s score from the four.
“When your back is against the wall you’ve got to go,” Babers said.
“I was kind of nervous to tell you the truth,” Moore said of the game’s final minutes. “I didn’t know
what was going to happen. I just was going by faith; belief without evidence. Leave it up to faith.”
Knapke wasn’t so skeptical. The redshirt sophomore, who seems to have gained poise and confidence over
his first five career starts, didn’t think twice about leading his team in the two-minute drill.
“We felt confident going into it,” he said of the last drive. “We did it against Indiana and we do it all
the time in practice, working the two-minute drill and all that kind of stuff. We knew we just had to
execute.”
While it was Bowling Green’s second defensive stand in the final two minutes in as many weeks, the
Falcons also forced a late fumble against Indiana, which could have potentially beaten Bowling Green had
it not been for the fumble. Without those late-game heroics, the Falcons could realistically be sitting
at 1-5 overall and 0-2 in the MAC. But for now, this team is sitting just fine.
“Regardless of popular demand, I realize somewhere down the road we’re going to need our defense to come
up extremely big for more than one, two, three quarters,” Babers said. “We’re going to need them to play
that game that we’re all hoping and waiting for. And it’s going to come. And when it comes it’s going to
be something big. When it happens we’re going to be complete. And when this team becomes complete, watch
out.”
NOTES: It was the first game that Bowling Green has allowed less than 42
points to an FBS opponent this season … Buffalo dropped to 3-3 overall and 1-1 in the MAC … Knapke
finished with 321 yards, one touchdown and one interception … The third quarter was the first time the
Falcons have shutout an FBS opponent in a quarter all season … Bowling Green had 508 total yards … Zach
Colvin, DJ Lynch, Ryland Ward, Gehrig Dieter and Victor Osborne all sat with injuries.