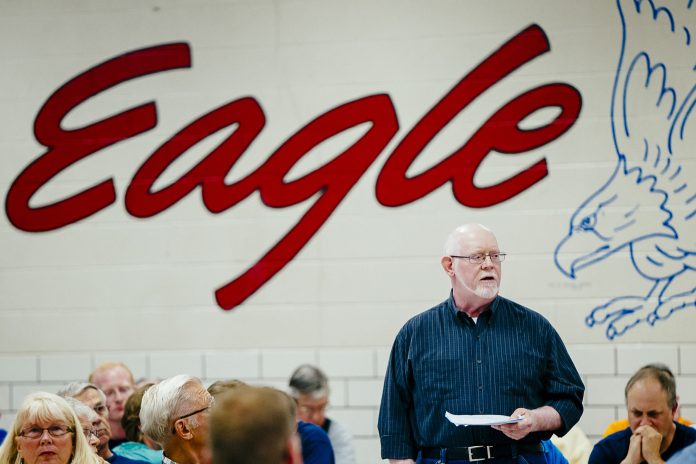 PEMBERVILLE – Although it would cost Eastwood Schools residents no additional taxes to build a new
elementary, there are still some arguing that it’s better to renovate existing buildings.
About 70 people attended a Town Hall meeting Tuesday to learn about the new funding method the district
can use for its $12.5 million portion of a $19 million new K-5 building.
That was followed by more than an hour of comment by residents, both in support of a new school and
opposed.
Superintendent Brent Welker explained that with tax abatement money from Home Depot, and annual taxes
from Troy Energy, the district would have enough to pay off the new school in 10 years and still have
money left over yearly for the general fund.
"There is no reason to run a bond issue for our local share when there is no need for the
money," Welker stated.
The district would borrow $11 million (and take the $1.5 million needed balance from the general fund)
and have a payment of $1.275 for 10 years.
The combined revenue from Home Depot and Troy Energy is estimated conservatively at $1.675 million a
year.
"We can get this covered in 10 years," stated Welker.
The Ohio School Facilities Commission will cover the balance of $7 million.
To a question of whether the district will be asking for a new levy soon, Welker replied that it wasn’t
planned. The tentative five-year forecast shows a cash balance of about $3 million in 2019.
Board member Roger Bostdorff was quick to point out that the district will have two renewal levies in the
next two years.
Dan Martin asked it any site plans had been developed.
Welker said there is substantial space east of the middle school, and in answer to another question, no
new sewer system would be needed.
Roger Mullholand, of Pemberville, spokesman for the Committee to Save Our Elementaries, said the
community is disappointed that the board decided to remove a levy for the new school, thus taking away
voter opinion at the polls.
"We will pursue all legal options to bring it back to voters," Mullholand stated.
Treasurer Dave Michel said after the meeting the district cannot place a non-monetary issue on the
ballot. If the district goes to the polls, it would read as a request for 3.6 or 3.7 mills, and could
confuse voters who were told the project would not cost them additional money.
The district cannot just ask voters whether they support or oppose the new-school plan, he continued.
Michelle Rogers suggested residents "look at what’s best for the students … and best for the
taxpayers."
Matt Harper, who had three children attend Pemberville Elementary, said he was "surprised there is
opposition to this concept."
"Teachers at Pemberville did an impeccable job in spite of the facility. …"
The building lacks basic accommodations, such as handicap accessibility and inadequate classroom space,
he continued.
"If we want to keep up with technology, now is the time to do it. We are rapidly being outpaced by
our neighbors."
And a new school will attract young couples with kids to the district, he added.
It also would allow for the addition of all-day kindergarten as well as state-of-the-art technology, and
the elimination of shuttles thus allowing more instructional time each day.
It’s not just about technology, said Pemberville teacher Leslie Oestreich.
It has to do with little collaboration between teachers, having no phone in her classroom to immediately
contact the office, and spotty Internet service, she stated.
While he is not a member of an organized group, "there are hundreds of community members who will
support this," Harper stated. "We need to get behind this opportunity."
Mullholand countered that people agree with his committee’s stance to refurbish Pemberville and Luckey
elementaries, but are afraid of repercussions.
Carol Bailey suggested the district stand out from the crowd and go a separate route from Elmwood, Otsego
and Lakota, which all consolidated onto one campus.
"A new building is not necessarily the answer," she stated.
She suggested the board bring in an architect to do a comprehensive study of the two elementaries to see
if they can be refurbished.
"That’s all we ask."
The Luckey school was built in 1926 while the Pemberville elementary dates back to 1936, and a
feasibility study has been done at both schools by the OSFC.
The commission conducted the assessment, which included a comprehensive inspection of each building and
then generated a report indicating the condition of each aspect of the building and whether or not it
needs repair, replacement or no action.
The decision was to replace both schools.
It reported that a partial renovation of both the elementary buildings would cost roughly $9 million. A
more thorough renovation of the two elementaries would cost $13.5 million, according to numbers
previously released by the district.
But to do renovations, the district would relinquish the OSFC money.
Pemberville Village Councilman Eric Campbell said he was concerned that the district had no long-range
plans for the middle school or high school.
In answer to complaints about lack of doors in the Luckey restrooms, cracked sidewalks at Pemberville,
and the leaky roof at the middle school, "we can’t take care of what we got," stated
Pemberville businessman Denny Henline.