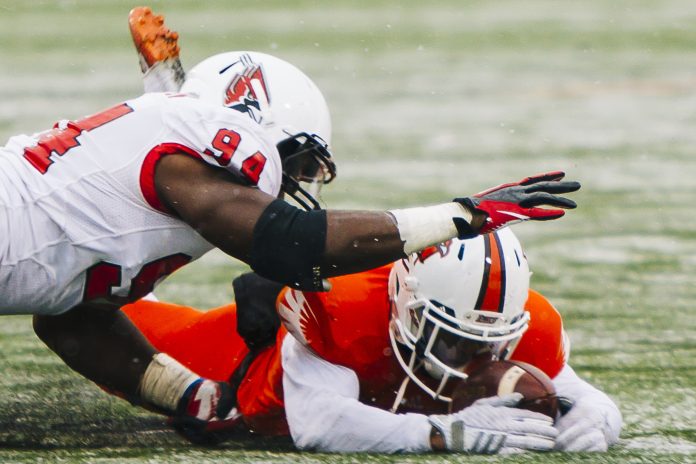 Most could infer that Bowling Green’s 41-24 loss to Ball State last week was ugly. But nobody truly got a
feel for how head coach Dino Babers felt about the loss.
Immediately following the game he mentioned the team played poorly and that the Falcons should have been
able to close the game after taking a 21-7 lead in the first quarter. His true sense of that game came
out in Monday’s weekly press conference.
For the first time this season Babers publicly criticized his team for its performance in last week’s
loss. He said it was disturbing in the lack of focus given the circumstances of the game as it was
Senior Day at Doyt Perry Stadium.
"Enthusiasm and effort," said Babers when asked what went wrong in last week’s game. "You
have to respect the game and you have to play the game with the right enthusiasm and the right effort. I
take full responsibility for that. I think we had one quarter of great enthusiasm and great effort and
then after that it dwindled and dissipated.
"Based off the situation and the last seniors’ home game … it’s really disturbing," he said.
"We’re going to rebound though. I’ve got faith in these guys."
Bowling Green, sitting at a measly 7-5 and 5-3 in the Mid-American Conference, after starting the year
5-2, 3-0, limps into the conference title game against Northern Illinois (10-2, 7-1) with a sense of
disappointment after two straight losses.
"They better be a little disappointed," Babers said. "I was a little disappointed. Our
family is a little disappointed. You do wrong with the family you’re not going to walk in there,
everything is going to be great, we’re going to sit you at the table and give you some Kool-Aid. It’s
not happening. They better be a little disappointed by that.
"Now we need to rebound," he added. "We need to come to play, show what kind of character
we have. … Let’s get back up and fight."
Now Bowling Green focuses on bringing the family back together and fixing the problems it created over
the last two weeks.
The offense produced a season-high 314 rushing yards in last week’s loss, but 144 of those yards came on
two carries, and 203 of the yards were in the first quarter – the only time where Babers said he saw any
enthusiasm or effort from his team.
"We need to do our technique a lot better," Falcons right guard Alex Huettel said. "We
kind of threw that out the window at some point in the game."
Bowling Green has been close in recent weeks. Despite the 17-point differential in last week’s game, the
Falcons had opportunities – missed opportunities – to score after traveling into Ball State territory.
The same can be said at Toledo. A seven-point loss could have been a win if not for misfires downfield,
or a particular touchdown pass to Roger Lewis that was called back after he was ruled to have stepped
out of bounds before the catch.
"Coaches are always going to have a good game plan for us; it’s our job to execute," Huettel
said. "There’s numerous clips on the game film from this past Friday, even back to Toledo, we were
one guy away every time. That hurts to see, it’s very frustrating. But I’m confident in the guys that
are taking the field and the coaches that are scheming up the game plan."
That confidence in players includes quarterback James Knapke, who has been subpar in recent weeks. After
a 7-for-25 effort at Toledo that earned him a fourth-quarter benching, Knapke was 18-of-27 for just 140
yards and zero touchdowns against Ball State.
Yet Huettel’s confidence gleamed, and Babers never wavered when asked if Knapke would start in the MAC
title game.
"(He’s) absolutely starting the game," Babers said of Knapke.
"The same as any game – high," Babers said when asked about his confidence in his redshirt
sophomore quarterback. "He deserves that. He’s earned that right."