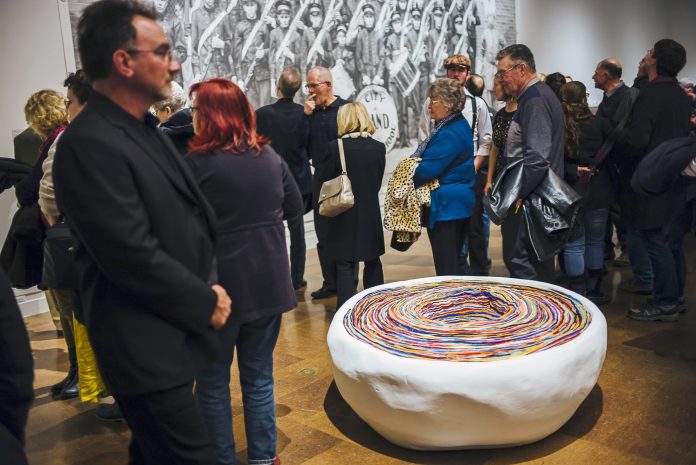 The 95th Toledo Area Artists Exhibition has a new look.
Fewer artists, only 28, were selected from the 462 who applied. That multiple works on exhibit for some,
and more noticeably more room for larger works to stretch out, in the spacious, elegant show in the
Toledo Museum of Art’s Canaday Gallery.
Despite the changes, artists from Bowling Green State University’s School of Art still made their
presence known.
Faculty member Michael Arrigo received the second place award for his video installation "Sirens’
Song," and 2013 BFA graduate Zak Lyons won the third place award for his intaglio print
"Goodbye Blue Skies.".
Also included in the show are Arrigo’s BGSU colleague painter Dennis Wojtkiewicz and Perrysburg sculptor
Sandra Jane Heard.
Best of show honors went to Katie St. Clair of Ann Arbor for her large-scale acrylic and photo collage.
First place honors went to  David Eichenberg for his hyper-realistic portrait, "Doug."
Museum Director Brian Kennedy made reference to the controversy stirred up in social media about the
changes. Such dialogue is good. But he noted the show has always been changing, and those changes,
whether the decision to include photography and then awarding best of show honors to a photograph in
1978, or the inclusion of video in 1991, have sparked criticism.
Kennedy didn’t rule out further changes. He said the museum would be "very thoughtful" as it
considered the regional show’s future. The museum’s goal is to host the 100th Toledo Area Artists
Exhibition five years from now.
The museum brought in Christopher Knight, art critic for the Los Angeles Times, to decide on the awards.
Knight served as a fellow at the museum from 1973 to 1974, and remembers what the show was like back
then. Aspiring exhibitors were lined up outside the museum, with portfolios in hand, waiting to submit
their work. "It was pandemonium," he said.
Over the years the regional show has become rarity. Knight knows of no other museum of "this
magnitude" that continues the tradition of a show of regional artists.
And the quality of the art, drawn from a 150-mile radius of Toledo, justified continuing the tradition,
he said.
The quality was so good, Arrigo assumed he wouldn’t be in the running for an award. He saw the other
works when he went to the museum to set up his video installation, which features images of himself and
his daughters, flashing to a booming soundtrack.
For Lyons, of Toledo, the win was validation of his decision to return to school to study art. Out of
high school he worked as a stage hand throughout the area, a job he still does for the Toledo Symphony.
The 36-year-old has also been employed at various other companies. It was while working at Checkers
Distribution in Maumee that people started commenting on the drawing he was doing in his off time.
His mother told him that if he wanted to pursue art this was the time. So he started by attending Owens
Community College before transferring to BGSU. Tyler studied both with Arrigo and Wojtkiewicz.
His landscape was cited for blending the realistic and a sense of the fantastic.
The exhibit, which includes 73 works, continues through Jan. 4.