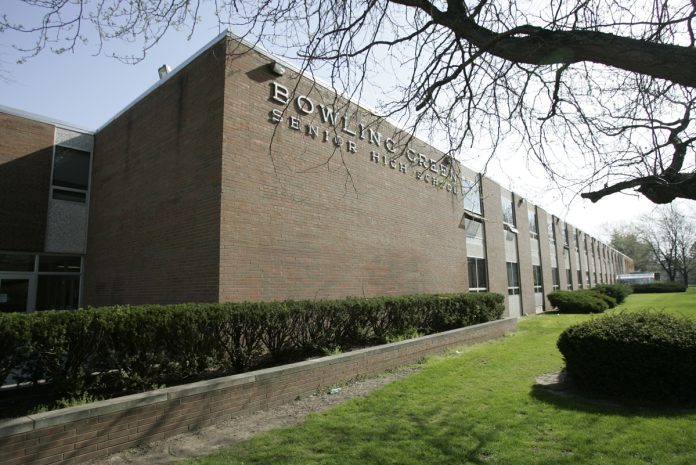 Bowling Green Schools’ Strategic Plan has just five goals, but succeeding at them will move the district
toward where it needs to be, as urged by community members.
"These goals will put us where the community thinks the school district needs to be," said Todd
Cramer, executive director of teaching and learning.
Superintendent Ann McVey presented an overview of the plan at October’s board of education meeting.
Goals include having students show academic achievement, communicating effectively, creating a three-year
technology plan, introducing STEM courses and continuing sound fiscal practice and long-range financial
planning.
The goals came from extensive conversations with more than 1,000 community members during forums held
last summer.
Cramer called the plan "our blueprint to success."
Work will continue for students identified as gifted, those with disabilities, plus all students to
annually demonstrate academic achievement as measured by meeting or exceeding expected growth per value
added model on the Ohio Department of Education Report Card.
Value added asks the question "Did the students get a year’s worth of growth?" for math and
reading in grades 4-8.
In this year’s Report Card, the district received an A for all students; and a C for gifted students,
students with disabilities and those identified as the lowest 20 percent statewide in reading and math
achievement.
The purpose of value added is to know the impact of curriculum, instruction, assessments, and practices
on student learning.
Of the district’s three elementaries and junior high, Crim is doing the best in these four categories.
(http://reportcard.education.ohio.gov)
The district also plans to implement all-day kindergarten to achieve this goal.
The district also will utilize Facebook, Twitter, and YouTube; work toward a larger presence on the radio
and newspaper; start a district newsletter; and have a larger presence in the community.
By utilizing targeted medium, the goal is to reach 75 percent approval rating of good or excellent as
measured by survey results.
A survey of community members will be done each year; the last one was in August.
The district also will create a three-year technology plan to evaluate the effectiveness of technology as
measured by staff, student, parent and community feedback.
The plan also is to implement science, technology and engineering at the high school to prepare students
for 21st century careers by introducing STEM courses. These courses also will be introduced at the
middle school as electives.
The last goal is to maintain fiscal stability through using sound fiscal practices and long-range
planning as measured by the semi-annual five-year forecast.
At this month’s meeting, Treasurer Rhonda Melchi told the board the district should stay in the black
through fiscal year 2018.
That is dependent upon levies that will be up for renewal next year. The district’s $1 million emergency
levy and 4.2-mill property tax levy both expire at the end of 2015.
"Those funds represent almost $3.5 million of our current budget," Melchi stated.
Her forecast assumes both levies are renewed.
In fiscal year 2019, which ends June 30 of that year, Melchi is projecting a cash balance of negative
$1,770,735.
Before the cuts, the district was expected to end in the red in fiscal year 2017.
In the past four years, the school district has made $3 million in budget reductions, and negotiated
union contracts saved nearly $1 million from fiscal year 2013 to fiscal year 2014.
The majority of the goals can be accomplished within a two-year time frame, Cramer said.