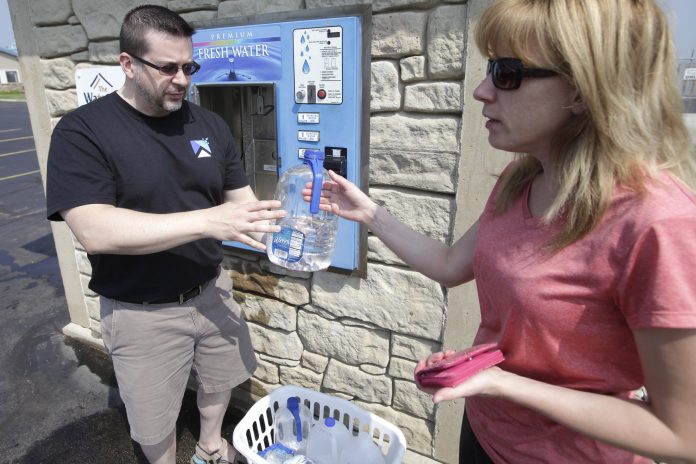 Early Sunday morning, Greg Whitt of Perrysburg was filling up large water jugs at the Northwestern Water
and Sewer District for his home’s humans and dogs. The irony of the situation was not lost on him.
"We live by the Great Lakes. We’ve got a great water supply," Whitt said. "The fact that
algae can bring Northwest Ohio to its knees seems pretty silly."
Sunday was the second day of traveling for water for Chris Bayes, also of Perrysburg.
"I went to Findlay yesterday morning," he said.
On Sunday, Bayes filled up seven five-gallon jugs, not for his home, but for the workers of his
construction company, Bayes Inc.
Monday meant it was back to work for his crew, and he wanted to be prepared.
"I just want to make sure I have enough for tomorrow for the guys," Bayes said.
Kathy Geisbuhler, of northern Wood County, was also filling jugs with the free tap water at the district
distribution site for home use.
"I don’t even want to use the water for washing dishes," she said of her home water supplied by
the city of Toledo.
"It’s a really nice thing for them to do," Geisbuhler said of the district’s effort to give
away water.
"You don’t want to panic, but you want to be smart," she said.
Thousands of northern Wood County residents supplied by Toledo water were stocking up at several
distribution sites set up this past weekend.
Bowling Green has offered to supply water from its line on Roachton Road for a water distribution site at
Perrysburg High School. The city of Perrysburg is also arranging for a large load of water from the city
of Springfield. That water may be available Monday at the city’s public works department on Roachton
Road.
The other sites currently offering water in Wood County are:
• Water station at the Northwestern Water and Sewer District, at 12560 Route 582, between Perrysburg and
Bowling Green. The water is free until the water crisis is over.
• Rossford High School, where water bottles are being given away.
• Lake Township Fire Station 2 on Ayers Road, which is using Oregon water that is safe to distribute.
• Northwood Fire Station 2 on Wales Road, also giving out Oregon water.
• Water shed in Stony Ridge on U.S. 20 – though that station is on a well, so it takes some time to fill
up between distributions.
• Water shed at the corner of Haskins and Poe roads in Bowling Green.
People are asked to bring their own water containers to the sites.