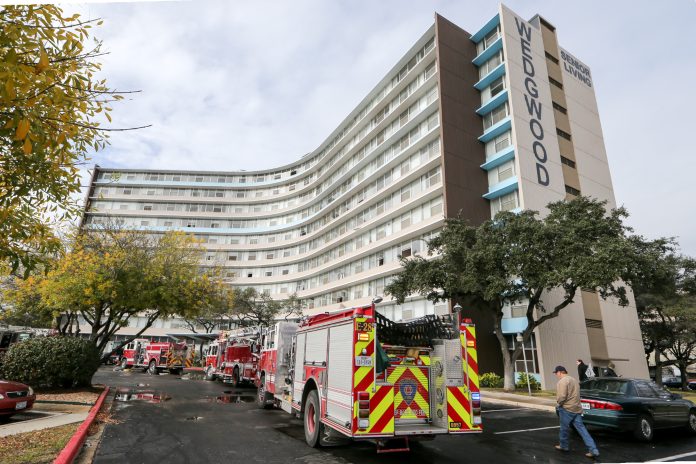 Castle Hills City Manager Diane Pfeil said 17 residents were in hospitals, including one in serious
condition.

Meanwhile, officials were "working feverishly" to account for about 80 residents of the
Wedgwood Apartments, she said. Authorities believed those people found refuge with family or had left
for the holidays before the Sunday morning fire and were confident no other victims were in the 11-floor
building.

"There’s any number of reasons why these people are unaccounted for."

"That’s one of our top priorities," Pfeil said.

The building is managed by Los Angeles-based Entrada Management Services. A phone call to the office of
Reuben Berman, identified as a founder and principal of Entrada Partners on the company’s website, was
not immediately returned to The Associated Press on Monday.

Two of those killed were identified as Jose Gonzales, 73, and Karen Rae Betz, 74, according to the Bexar
County Medical Examiner’s Office. Names of the three other people who died were being withheld until
their relatives could be notified.

A total of 150 firefighters from San Antonio and six other fire departments responded to the blaze, which
was reported shortly after 6 a.m. Sunday.

State and county officials worked Monday to determine a cause for the fire, which appeared to have
started on the third floor. Pfeil said the last fire inspection took place in September and the building
had no history of fires.

No sprinkler system was installed when the structure was built in 1965, according to Pfeil. Rules now
require such sprinklers but the building, home to about 350 people, was grandfathered, allowing it to
keep operating without them.

"We’re going to look at that now in light of the fact we’ve had fatalities," Pfeil said.

Many of those evacuated were taken by city buses to a high school, and some family members waited Sunday
at a makeshift shelter in the cafeteria for word of their loved ones.

Displaced residents eventually were housed in two hotels. Firefighters went room to room in the evacuated
building to retrieve medications for many of them. Others were able to get their medications Monday at
City Hall.

"This was an elderly population and medicine is very important to them," the city manager said.

Some people left the building without their dentures and prosthetic limbs. Pfeil said the Red Cross was
working with authorities to hopefully get those essentials Tuesday and deliver them to the hotels.

Castle Hills, one of several enclaves of San Antonio, has about 4,200 residents.