Gloria R. Wohltman of Luckey, 93, passed away on Thursday, March 10, 2022 at Hospice of Northwest Ohio in Toledo.

She was born on April 19, 1928 in Luckey, Ohio to Arthur and Grace (Garling) Reamsnyder.

She was a 1946 graduate of Troy-Luckey High School.

On June 24, 1948 she married LeRoy W. Wohltman at Grace Lutheran Church in Luckey, OH. Gloria and LeRoy raised 4 children and celebrated over 40 years of marriage until LeRoy’s passing in December of 1988.

In addition to being a homemaker, in her earlier years Gloria was as a beautician, owning and operating her own beauty shop in Luckey. She was a lifelong member of Salem Grace United Lutheran church where her ministries included the church choir and altar guild to name a few. She was a past member of the Luckey Garden Club, Webster Homemakers Club, and had been a Boy and Girl Scout Leader. In her free time, she enjoyed playing Bunco, however, it was her family especially her grandchildren that gave her the most joy.

A funeral service will be held at the funeral home 11 a.m., March 15, 2022 with an additional time of visitation from 10-11 a.m., until time of service. Officiating will be Vicar Dawn David. Interment will be in Troy Township Cemetery, Luckey, OH.

In lieu of flowers the family requests that memorials take the form of contributions to: Salem Grace United Lutheran Church or Hospice of Northwest Ohio. 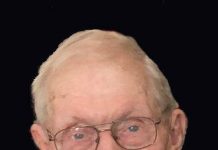