Jennifer Roos is introducing area cooks to the Sleadd family recipe for Derby Pie, the annual traditional
dessert served during Kentucky Derby-related events in her hometown of Louisville.
The recipe is old. Roos knows it was being made this way long before she was born, but she has no idea
how long.
She is a Kentucky native who came to Bowling Green to coach women’s basketball.
Starting as assistant coach in 2001 and earning the title of head coach for the Bowling Green State
University program, she racked up an almost 70% success rate over her 17 years of coaching at BGSU.
Prior to coming to BGSU, she played college basketball in North Carolina for Davidson College and then
coached at the school.
“It was very strange for me, when I went away for college, because every day growing up, Derby Eve, the
Friday before the Derby, all school was canceled. That Friday no one had school, public, private or
parochial,” Roos said. “No one had even heard of the race,” she said about her years at college. “So I
got to talk to my friends about what the Derby meant to the city and the state, and my Mom sent me a
couple pies to college so they could try them out.”
Her friends now also have the recipe and hold their own Derby parties.
She even named her dog, a chocolate lab, Derby.
“It’s a special time for the city, hosting the Kentucky Derby. They have a Kentucky Derby Festival for
the weeks prior to the race. They have a half marathon, a full marathon, balloon race, a steamboat
race,” she said.
More than 200,000 will come to festivities.
“It’s the opportunity for the city to have the fastest two minute race in sporting events,” Roos said.

“Spring has sprung in the city and people come from all over. It’s a worldly event, I believe. And it’s
the pageantry. It’s not just the women’s attire, but the men’s attire. It has also grown into the
Kentucky Oaks, a race for fillies. Then on Thursday before the Derby, the call it Thurby, a lot of
locals will tend to go to races on that day, because tickets for the Derby are harder and harder to come
by,” Roos said.
People will make the pie for the Kentucky Derby, which is historically the first Saturday in May.
“We usually will make it for the annual family reunion, which we host around the time of the Derby.
Typically a lot of people will go to the Derby, so we won’t hold the reunion on that Saturday, we have
it right there around.”
According to Roos, versions of this recipe will be trademarked and sent all around the world.
She notes that a 1/2 pound of pecans will equal 2 cups. They don’t go to waste, as when serving between
40-50 people, she will be baking a number of pies, because they are the traditional dessert and very
popular.
“Everyone will have a different amount of bourbon in it. You can leave (the bourbon) out. There’s very
little of it, but you can still taste it,” she said. “The slices are heated up. It’s very sweet and
served with vanilla ice cream.”
She recommends Maker’s Mark brand bourbon.
Roos prefers the richness of real butter, but she will substitute margarine for family who may have
allergies.
Pecans on the top of the pie will mark it as one that has nuts it. Roos recommends holding back several
whole pecans that have a good look for the top. As seen in the photo, she will make a small three
pointed star, but that is just her creativity.
The pie is not commonly sold in Northwest Ohio, but it is sold at every grocery store in Kentucky, she
said.
“This is the primary dessert for the reunion, that we have been doing for years. We’ve just kind of
tweaked the recipe. Some of my family have allergies. We don’t put pecans in sometimes. Some like
bourbon in theirs and some don’t.
“It’s always a big hit, because of the time of year with the Kentucky Derby. I don’t even know that you
could compare it to the Ohio State – Michigan football game here, except it’s a two week celebration,
prior to, and the race is two minutes long.”
Always the competitor, Roos hopes that the pie recipe will be the catalyst for an expanded number of
Derby celebrations.
“If even one more pie and party takes place from this story, then I have succeeded,” Roos said.

An experiment in cooking

Exploring power of the purple 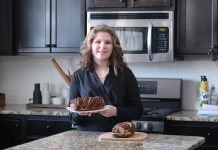 Braided bread a treat for the senses