A house, in need of repair, sits along East Grand Boulevard, March 8, 2021 in Detroit. Nicole Curtis, the
star of HGTV’s “Rehab Addict Rescue,” apparently was “scammed” when she bought the blighted Detroit home
from someone who wasn’t the owner, the mayor said. The Detroit Land Bank Authority holds the title to
the house. Curtis said she paid $17,000 for the property in 2017 and has spent $60,000 in repairs and
other costs so far. (John Greilick/Detroit News via AP) 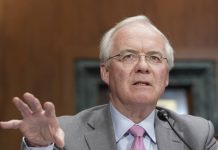