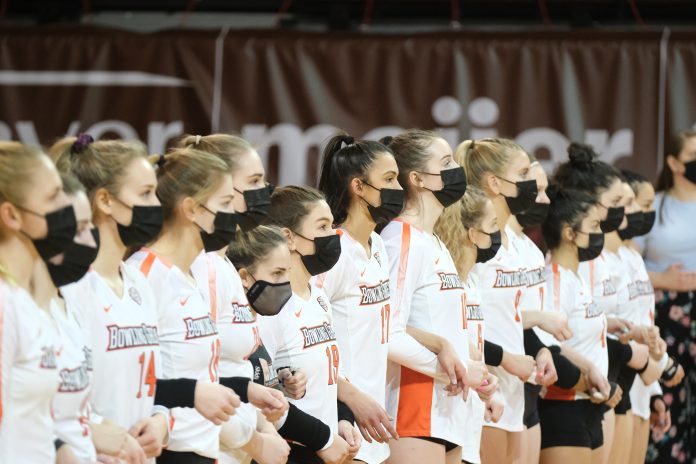 MOUNT PLEASANT, Mich. – Bowling Green volleyball competed a sweep of Central Michigan Friday and have now
won a school-record of 13 victories to start the season.
The 2011 team started the season with 12 matches.
“I am thrilled that this year’s team, this group of student-athletes made history today. The character of
our women, an unmatched level of commitment to be the best that they can be, and above all, the love for
each other and the game is what defines this team for me, not the record we hold,” BG head coach
Danijela Tomic said.
In the first set BG trailed 5-2, but won eight straight points to take control of the set. CMU tied it at
18, but the Falcons posted a 25-20 win.
BG also played well in the second set and at one point had a 19-11 lead. CMU pulled to within 20-16, but
the Falcons were able to post a 25-19 victory.
Central Michigan won the third set, 25-21. The Falcons were within 20-18, 22-20 and 23-21 before the
Chippewas scored the final two points to win the set.
The Falcons started quickly again in the fourth set, but CMU pulled to within 14-12. BG then won six of
the next seven points to take a 20-13 lead. The Chippewas then closed the gap to 23-21 before the
Falcons sealed the win 25-23, with the last two kills from Katelyn Meyer, an Eastwood graduate.
“Today’s game was a story of highs and lows, so we still have work to do to become more consistent. The
first two sets were very good offensively, especially once our defense stepped up and created offensive
opportunities,” Tomic said. “One constant throughout the match that had a significant role in our
victory was our aggressive serving.”
Three Falcons were in double-figures in kills – Meyer with 16, Petra Indrova with 14 and Jacqueline Askin
with 11.
BG had 12 aces in the match, including six from Julia Walz who tied the ttie the program record for aces
in a four-set match. Walz had three straight aces in the third set.
Walz also led the team with 21 digs. Freshman Alex Laboy chipped in with 14 digs and Indrova finished
with 11 digs for a double-double. Hanna Laube had 41 assists for the Falcons.
Overall the Falcons had 51 kills, 13 blocks, 48 assists and 70 digs,
Central Michigan, now 7-7, had a double-double from Savannah Thompson with 15 kills and 14 digs.
“We will enjoy this historic day for 24 hours, reflect on the journey we have had so far and then get
back in the gym to continue working and striving to be the best that we can be,” Tomic said.
Thursday’s win for Bowling Green came from an all-around team effort that filled the stat sheet beating
CMU, 25-18, 25-17, 25-20.
The Falcons will play at the Stroh Center on Thursday and Friday against Eastern Michigan with both
matches set to begin at 4 p.m.