Sometimes life with a small business is fun and games for Mike Tyson, owner of Mike’s Party Mart, but on
the 45th anniversary of his business, he knows that all comes after the dedication and sometimes
dropping everything to make it work.
“Responsibility, discipline and respect for people,” Tyson said are what is needed. “With the blizzard of
‘78, I opened the store for four hours with walking through deep snow.”
That’s just one of the many stories Tyson has of his years of making the business work, even when it was
inconvenient or hard for him.
His business is built around beer, wine and liquor sales, and he takes pride in the wide ranging options
he has for each.
“We have cold domestic beer and import beer, craft beer, wines, liquor and other malt beverages,” Tyson
said. “With the wine, we have 600 varieties and wine and feature 10 Ohio wineries. There are more than
60 craft beer selections and more than 300 beer and malt beverage choices.”
The little party store is unique and known throughout the state for fish stories, big bucks and the
lottery. Sometimes those three subjects converge, but they are serious business for Tyson, who grew up
hunting and fishing. Logically, he made them each a big part of the draw for his store.
His store is the number one lottery business in Wood County, out of 126 stores, and ranked 261 out of
10,701 statewide. Several lottery customers have been on television, wearing his store T-shirts.
“We pay out a lot of winners,” Tyson said.
Most of those winners get paid out in his store. His biggest winner was for $300,000, but he doesn’t keep
that kind of cash in the store.
As a 1973 graduated of Elmwood High School and 1975 graduate of Owens Community College, he has a strong
connection to Wood County and Bowling Green. He was 20 years old when he started the business and did it
on a shoestring budget with a small loan from his parents.
Right from the start he also sold hunting and fishing licenses, as well as bait. The store is one of the
top selling fishing license locations in the state.
His most recent business-oriented pivot has been with the outdoors sports. They had been declining in
popularity, but Mike’s Party Mart is an essential business and he predicted the pandemic would bring
people back to hunting and fishing. He believes the sports make social distancing easy. He’s always
willing to answer questions for people who are new to the activities.
“We love our customers and the community has been good to me, and we’ve tried to serve them too,” Tyson
said.
That dedication to his customers is also extended to his employees, who have tended to be university
students.
“I really feel I have made an impact on their growing and life. I know I’ve had an impact,” Tyson said.
“I like to think this is a stable grounded environment for them, and something they can count on.”
He has periodically taken his knowledge to business classes at Bowling Green State University.
“I try to tell the college students about the dedication it takes to make it. I ask, ‘Are you willing to
do that, or are other things more important?’”
He also tells them about the benefits of being a planner and having a balanced life as a small business
owner.
To avoid burnout, he has embraced a lifelong passion for baseball.
“I’ve been on two Roy Hobbs World Series championship men’s 45-age group amateur baseball teams, with
Huntsville, Alabama, and Kent, Ohio. I’ve stopped playing now, but I’m coaching third base in the world
tournament now,” Tyson said.
Family is also very important to Tyson and he gives a lot of credit to his wife, for being supportive of
his dedication to the business.
You can find his store at 834 S. Main St., in Bowling Green and online at www.mikespartymart.com .
Tyson likes to remind people, when they stop to buy beer or wine, to take a look at the wall of photos of
trophy fish and deer. With more than 10,000 deer checked, there were some state winners, including a
27-point buck from Perrysburg.
There are also photos of a 47 inch catfish, a 25 inch bass and a 35 inch walleye. Tyson said that those
are fish stories you can trust. 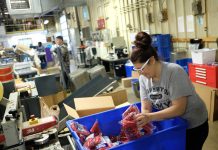