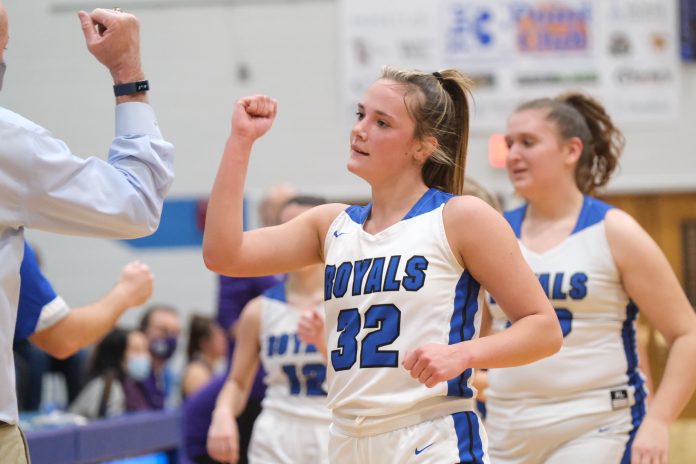 WHITEHOUSE — No. 1 seed Elmwood girls basketball drained nine 3s on Thursday night en route to a 55-39
district semi-finals victory over No. 7 seed Swanton.
The game, played at Anthony Wayne High School, was one defined by runs.
Neither team could buy a bucket in the opening minutes of the game and it was Swanton who went on a 4-0
run to start the game with a basket each from twins Averie and Aricka Lutz.
Elmwood head coach Doug Reynolds called a timeout to gather his team together.
“You … hope that nerves don’t get the best of you in situations like this but they did. Once we were able
to get out and run with the ball, things were able to settle down for us,” Reynolds said.
Not only were the Royals able to get out and run, they were also able to find open shooters all over the
place, leading to back-to-back-to-back 3s midway through the first quarter that catapulted them to a
15-5 run to end the quarter.
The second quarter opened up immediately with a Lainey Bingham steal and a Brooklyn Thrash putback to
continue the run.
A Cara Frank 2-point jumper and a Bingham 3 continued to add on to the run as the Royals led 23-9 in the
second quarter.
The Bulldogs fought back hard, though, as the Lutz twins each put their mark on the game. Neither was
afraid to shoot from long distance as they combined for five 3s on the night between the two of them.
Aricka Lutz led the Bulldogs with 16, Averie Lutz added 10.
This led to an 8-3 run at the end of the half to make the score 26-17.
The second half continued to favor the Bulldogs as they came out of the half on an 11-2 run, raining in
3s of their own. This led to a tie game at 28-28 and once again the Royals needed to respond.
They did so, and with the long ball, as Thrash hit two more 3s in the quarter to give Elmwood a 36-31
lead heading into the final period of play.
“We knew what spots we had to be in and we just needed to hit the 3s and thankfully we did; Our 3-point
percentage was pretty good,” Reynolds said.
Thrash ended with 18 points to become the all-time leading scorer in Elmwood history as just a junior. 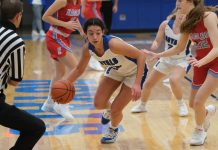