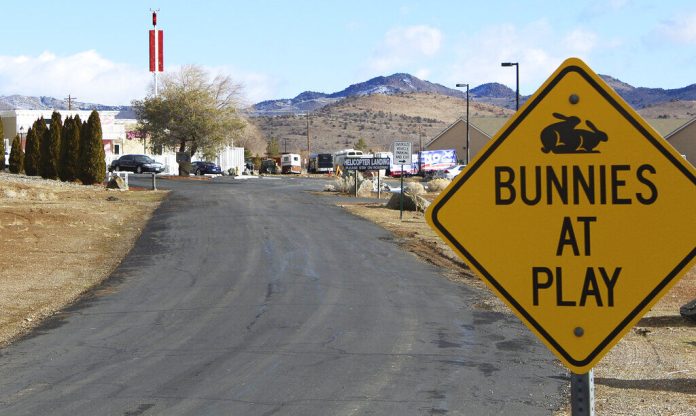 LAS VEGAS (AP) — Before the coronavirus pandemic, tourist-dependent Nevada had a notorious attraction: It
was the only place in America where someone could legally pay for sex.
These days, even in the state known for sin, the business is taboo.
Legal brothels have been shuttered for nearly a year, leaving sex workers to offer less-lucrative
alternatives like online dates or nonsexual escort services. Those in the industry say many of the
licensed prostitutes, who work as independent contractors, have struggled to qualify for unemployment
benefits since closures began last March and some have opted to take their work into the shadows,
offering sex illegally.
While the business of legal bordellos may seem incompatible with social distancing, sex workers and
brothel owners say that’s not the case. Like other close-contact industries such as massage therapy and
dental services, they contend brothels should be allowed to reopen with protective measures.
"We could easily do work at arm’s length, just the same as they do within the massage parlors, which
are open in the state of Nevada," sex worker Alice Little said. "You can go to a dentist and
have him put his hands in your mouth. You can go to a tattoo parlor and get your face tattooed right
now. You can get piercings put in your face. You’re certainly not masked for any of those things."

So far, Nevada officials haven’t agreed.
A state task force that makes recommendations on coronavirus restrictions hasn’t responded to pleas from
brothel owners seeking a way to reopen. And a lawsuit Little filed against Gov. Steve Sisolak last year
fizzled.
The Democratic governor recently said brothels, along with other adult entertainment like nightclubs and
strip clubs, would stay closed at least through May 1. After that, the state may let counties decide
whether to allow those businesses to open, as long as COVID-19 infections aren’t surging.
Nevada, like many states, saw a spike of coronavirus cases, hospitalizations and deaths around the winter
holidays, but since mid-January, those numbers have been steadily declining.
Prostitution is only legal in Nevada’s estimated 20 licensed brothels, whose sex workers undergo regular
tests for sexually transmitted diseases and HIV/AIDS and obtain required work cards from local law
enforcement after passing an FBI background check.
A throwback to the state’s days as a Wild West mining territory, brothels were illegal but tolerated in
some areas until Nevada legalized them in 1971.
They’re only allowed to operate in counties with populations of less than 700,000 people. Brothels and
prostitution are illegal in the counties that include Las Vegas and Reno, but some brothels are a
half-hour to an hour away. Some offer free limo rides from the casino-heavy cities.
Little, who was working at the Moonlite Bunny Ranch brothel in the capital of Carson City, says she has
lost 95% of her income amid the closures. She said she’s been providing virtual dates, webcam
experiences and creating X-rated content through subscriber site OnlyFans, among other ventures.
"At this point, I am able to survive. I am able to pay my bills. I’m able to put food on the table,
but I have had to dip into my savings," Little said.
Other brothel workers who are not comfortable linking their faces to online sex work have had a harder
time pivoting to virtual services, she said. Finding a job outside the stigmatized sex industry also can
be tough, Little said, because background checks can reveal the work authorization cards prostitutes
must have in brothels.
Allissa Starr, who was working at Sheri’s Ranch brothel in Pahrump, about an hour outside Las Vegas, said
some women she worked with are illegally offering sex for money despite virus concerns.
"They’re just doing what they can," she said.
Starr, like Little, started offering virtual dates, where she might share a glass of wine, dinner and
conversation with clients. Starr said she eventually got assistance under the federal pandemic
unemployment program for gig workers, but it was about 10% of what she had been making and is set to run
out soon.
Starr said she’s able to cover her bills but can no longer put thousands in savings. She moved to
Pittsburgh to live closer to family and save on rent. She’s starting a self-care business but said if
Nevada’s brothels reopen, she’d come back to work one week a month.
"It’s a way to easily provide money for me and my family, and it’s a way to provide security,"
Starr said.
Reopening the brothels, Starr said, is "a personal risk, just like traveling. If you wear your mask,
if the girls got COVID tests before they came to the ranch, I think it could be done safely."
Mustang Ranch, about 20 miles (32 kilometers) east of Reno, appears to be the only brothel still offering
some kind of companionship, taking advantage of an escort license it’s had for about two decades. The
license allows customers to hire women for nonsexual companionship.
Owner Lance Gilman said temperatures are taken, masks are worn and customers must come to the ranch and
say where they’ll go on a date, typically a restaurant or casino.
Gilman said it’s a much-reduced operation — usually, about 30 women were available for hire 24/7. Only
three or four women are working as escorts because many of them are uncomfortable leaving the security
of the property for a date, he said.
Mustang Ranch submitted a proposed plan to state officials that suggests reopening for contactless dates
in private rooms, with masks and gloves worn by workers.
"In this industry, much, if not the majority, of the courtesan-customer interaction does not involve
physical contact even during normal business operations," the proposal says.
State officials haven’t approved the plan.
Asked how the brothel could ensure sex workers and customers have no physical contact behind closed
doors, Gilman said there’s no way to make such a guarantee: "All you can do is rely upon the
credibility and the ethics of the commitments that are made."
"Human nature is human nature," he said.