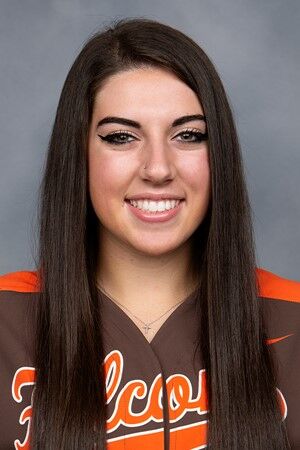 Bowling Green State University softball standout Payton Gottshall has been named the Wilson/NFCA Pitcher
of the Week. The NFCA made the announcement on Tuesday afternoon.
Earlier on Tuesday, Gottshall was named the Mid-American Conference Pitcher of the Week. BGSU swept the
league weekly awards, as Evelyn Loyola was named the MAC Player of the Week.
Gottshall, who hails from Massillon, Ohio (Perry H.S.), was dominant, to say the very least, in her three
appearances in the circle. She had a 3-0 record with an earned-run average of 0.00, and she allowed just
five hits in 21 1/3 innings of work for an opponent batting average of .072.
In her three appearances, Gottshall struck out 51 and did not walk a batter.
In Friday’s opener, Gottshall fired a one-hit shutout, striking out a school-record 20 batters. The
strikeout total tied her for third on the NCAA Division-I list for strikeouts in a seven-inning game. In
that win, she faced 22 batters, allowing only two to put the ball in play (a leadoff single in the fifth
and a popup back to the circle).
Then, on Saturday, all Gottshall did was throw a perfect game, striking out 16. It was just the second
perfect game in school history, and the first since 1993. She struck out 16 of the 21 Viking batters she
faced for her second complete-game shutout in as many days.
Then, in game two of Saturday’s doubleheader, she entered the game in relief, with BG trailing 6-1 in the
second inning, and proceeded to pitch 7 1/3 innings and pick up the win as the Falcons rallied for an
8-7, extra-inning victory. Gottshall struck out 15 more hitters in that game.
Gottshall and the Falcons head to Rock Hill, S.C., this weekend, as BGSU is slated to play five games in
the Winthrop Kickoff Tournament from Friday through Sunday.