Caroline Powers shoots first-round 75 in national tourney
DEVENS, Mass. – Bowling Green resident Caroline Powers shot a 3-over-par 75 Monday in the first round of
the U.S. Public Links Amateur Championship at Red Tail Golf Club.
Powers is in a nine-way tie for 43rd place. The field of 156 players will be cut to 64 after today’s
18-hole round for match play starting Wednesday.
Monday’s round included two birdies and 12 pars. She also had three bogeys and one double bogey.
Powers recently graduated from BGHS and will be a freshman in the fall at Michigan State where she will
also play golf.
Tracy wins IL batter of the week
ALLENTOWN, Pa. – Former Bowling Green High School and Bowling Green State University standout Andy Tracy
has been named the International League batter of the week for the period from June 15-21.
The first baseman hit .381 for the week and led the IL with 10 runs batted in and one runs scored. He
finished second in the league for the week in home runs (three), on-base percentage (.533), slugging
percentage (.952), and extra-base hits (six). Tracy is second in the IL with 47 RBI and tied for second
with 12 home runs.
Elmwood CC meeting Thursday
JERRY CITY – An informational meeting for anyone interested in running high school or junior high cross
country at Elmwood will held Thursday at 7 p.m. at the track. In the event of inclement weather, the
meeting will be held in the new school cafeteria.
Athletes and parents are urged to attend. For more information, contact Chris Hailey at (419) 957-9496 or
[email protected]
Smith wins silver medal
Joe Smith, from Bowling Green, won a sliver medal at 148 pounds in the 2009 IPF Bench Press World
Championship in Hamm, Luxembourg.
Smith benched 457 pounds (207.5 kg). Ravil Kazakov (Russia) won the 148-pound class with a bench of 473
pounds (215 kg) and Toshihiko Noda (Japan) took the bronze with a bench of 451 pounds (205 kg). This was
Smith’s fourth world competition appearance.
The United States won the team gold medal with 55 points with Finland second at 53 points. Poland was
third at 49. A total of 26 nations competed. Poland rounded out the Podium, scoring 49 points. A total
of twenty-six nations competed in the event, which was held May 27-30.
Isenberg has hole-in-one
OSCODA, Mich. – Mark Isenberg, from Bowling Green, made a hole-in-one recently on the Serradella course
at Lakewood Shores Resort.
He used a 5-iron on the 186-yard par-3 12th hole. 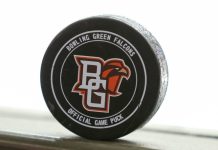 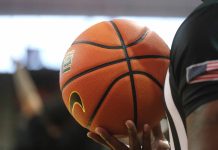 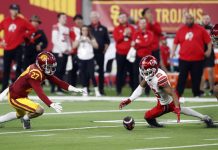