Students must be full time with a grade point average of at least 3.6 to qualify for the list.
Saint Leo University
Jordan Story, a graduate of Elmwood High School, made the dean’s list for fall term at Saint Leo (Fla.)
University.
University of Dayton
Allison Walden, Bowling Green, made the dean’s list for fall term at the University of Dayton.
A junior majoring in psychology, she needed a 3.5 or higher grade point average to make the list.
Ohio State University
The winter quarter honor roll at Ohio State University includes a number of students from Wood County. 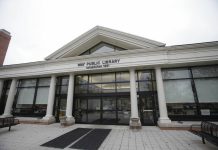