WESTON – With a $2 million debt forecast in the Otsego School District by the end of fiscal year 2013,
some local citizens are questioning why its board of education is pushing through the idea of building a
central campus and considering borrowing the money to do it.
Otsego Citizens for Neighborhood Schools met Wednesday night in the Weston fire hall to discuss several
issues and make plans for further action.
Tom Zulch read information from Otsego’s five-year financial forecast, ending with fiscal year 2013. The
school district will end fiscal year 2009 on June 30 with a $593,699 balance in the black. The following
two fiscal years are also estimated to be in the black, at $525,690 (2010) and $134,214 (2011). But 2012
and 2013 show balances in the red; $794,025 and $2,071,260 respectively.
"I don’t know what these board of education people are reading, but it’s not their finances,"
stated Zulch. "To emphasize how serious this is, it almost transcends the elementary (school)
issue. This has got to change at some point or another."
Regarding the lease-option plan the board is considering to get funds to build a central elementary, Jim
Repolesk questioned the interest rate they will get.
"They’re spending our money without voting on it, and that’s wrong … and they should abandon
it," said Rob Myerholtz.
"If they pass it, they should lower the American flag to half mast," responded Repolesk.
"Democracy just took a big hit."
Zulch urged audience members to attend upcoming school board meetings, including June 8 at 6 p.m. in the
high school library, and voice their anger that Weston School is being closed. "If they are
$500,000 in the black for the coming year, there really wasn’t any need to close it. … This won’t be
the only board meeting we’re going to ask you to attend. It becomes a community effort to save the
school and save the district as we see it."
Members agreed to meet Saturday at 9 a.m. at Weston’s town hall to receive dual flyers to leave at
people’s front doors in both the village and township. "Every door needs one put on it,"
stated Paul Perry.
Paperwork will be filed to make Otsego Citizens for Neighborhood Schools a political action committee
which will allow it to raise funds for advertising and yard signs.
Citizens were urged to support new school board candidates from Weston and Grand Rapids who plan to run
in November. Petitions for the candidates have to be turned in by Aug. 1.
Zulch explained the Weston area makes up a powerful voting block with 594 registered voters in the
township and 1,242 in the village. If about 3,000 voters in the Otsego School District cast ballots in
an election, "we have more than half right here in Weston." One focus of OCNS will be to make
sure voters are registered in both the town and township.
When Sharon Trumbull quipped, "But you always have Weston vote everything down," Zulch noted
there was only a two-percent difference in voters favoring the last levy between Weston (44 percent) and
Haskins (46 percent).
Debbie Allen asked if there are cost statistics to compare from the old high school to the new building.
Zulch answered, "within reason you can," and said the 10-year gas expenditure for the old
complex and former middle school (using figures from Weston which are comparable in size) was
$392,059.25 from 1999 through 2007.
In comparison, the new complex, in 28 months, has spent $269,808.63 on gas. Zulch said the new complex
would burn up in 32 months what it took 10 years to spend previously, and "this doesn’t touch the
electric or the water yet."
Myerholtz said he has already talked to 10-12 families who have already enrolled their children in
another district. He stressed the urgency for a citizen committee to walk through the elementary
buildings. The group applauded when Myerholtz questioned why the Haskins building was allowed to stay
open in its condition which another guest described as a "nightmare."
Several citizens agreed the board picks and chooses its criteria to get the results. When it was decided
to bus children from Weston to Grand Rapids because it was the better building, when the board had to
decide between Weston and Haskins, "they threw that criteria out," said Repolesk. "Now
they’re talking about population density. They pick and choose criteria as it pleases them."
The group will meet June 10 at 7 p.m. in the fire hall. 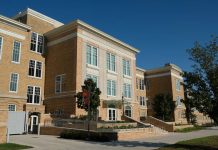